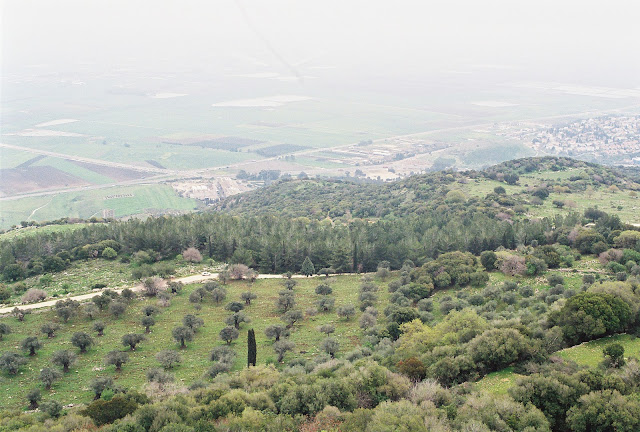 The Mount of Megiddo with this view of the Valley of Jezreel (Armageddon) was one of our last stops in March 2000. My emotions and experiences are beautifully articulated in this excerpt from the book, "Meeting God in Holy Places," by F. LaGard Smith:


"In his wondrous Revelation, John sees a vision of God's ultimate judgment on mankind, which, through the use of the word "Armageddon" he associates with the historic battleground of Megiddo.


Positioned at the center of this eternal conflict, Armageddon, symbolizes all battles between Good and Evil--past, present, and future. In the closing act of this section of Revelation, flashes of lightning, peals of thunder, an earthquake, and 100 pounds of hailstones are followed by a loud voice from the heavenly throne, saying, "It is done!"


One can hardly miss the obvious parallel between this scene and that awful hour at Crucifixion when the whole of heaven and earth shook at Jesus' own words, "It is finished!" The message of Armageddon is the good news that the outcome of the battle between Good and Evil is no longer in doubt. Ours is the victory! Through the death of Him who was slain for the sins of the world, both sin and death have been conquered--once and for all!


Good has already triumphed! Evil has already been defeated! Satan can't beat us! I put on my armor, took renewed courage, and launched out once again into the fray. But this time, walking closer than ever to the One who has already fought the greatest battle ever--and won!"
Posted by beth willis miller's blog at Saturday, December 26, 2009

Email ThisBlogThis!Share to TwitterShare to FacebookShare to Pinterest
Labels: Armageddon, Mount of Megiddo, Valley of Jezreel