Quicker Than A Wink 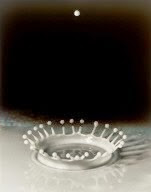 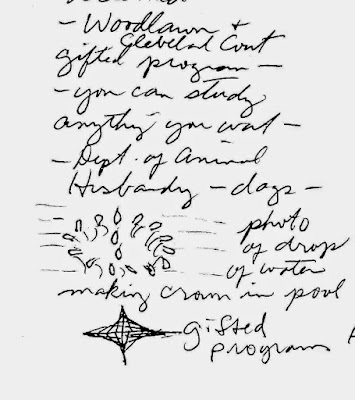 Sometimes it’s just a word that connects-the-dots to memory. Like the word, “crowned” in Psalm 8:5, "crowned him with glory and honor." A word study of the Hebrew word used for “crowned” is `atar (aw-tar') meaning "to surround, encircle (for protection); especially to crown -- compass, crown, to cover, enwrap, wrap oneself."

The moment I read this definition the image of another “crown” came to mind, but now with the added meaning, “to surround, encircle, enwrap.” The “crown” I pictured was actually a photograph of the “Milk Drop Coronet” taken by Harold Edgerton in 1957, an unseen world of objects in motion, capturing that which is ordinarily invisible to the human eye...yet it was real. I wrote the blog post below about the first time I saw the photograph in 1963, a memory that came back to me in 2007 as I wrote a journal entry in response to a Christian counselor’s prompt, “Tell me about a time when you felt special as a little girl.” As I wrote the journal entry, I drew a sketch of the photograph as I remembered it.

Quicker Than a Wink

I was the new kid in third grade at Woodlawn Elementary in Sebring, Florida, 1962. As an only child, I always felt alone, now even more so. The teacher said I was identified as “special” and would be “pulled-out” of my regular class once a week to go to a “special” class under the stage in the cafetorium to research anything that was interesting to me. “Special,” it fit, it felt good, I had been chosen, selected for something special, just like when I had been adopted, chosen, wanted, loved. Walking down the steps into the slightly darker, musky-smelling room under the stage, I picked up a book on photography. Turning the pages slowly, in awe at the wonder of this new world, suddenly there it was, the “Milk Drop Coronet” photograph by Harold Edgerton, an unseen world of objects in motion, capturing that which is ordinarily invisible to the human eye...yet it was real.

“Pretend you are “little Beth” and describe what it’s like to be you.” It was November 23, 2007, the counselor was helping me learn that “feelings are neutral” and how to let my feelings come to the surface, writing in my journal about how special “little Beth” felt in that room under the stage. Just a few weeks later, December 21, 2007, my family and I are visiting the Metropolitan Museum of Art in New York City. We walk through the central aisle, looking ahead, then suddenly, I turn my head to the right and from the corner of my eye, catch a glimpse of a photograph displayed in a darkened alcove. At first, I keep moving straight ahead, but something stopped me in my tracks and turned me around to go back and take a closer look. Back to the darkened alcove, back to the darkened room below the stage, back to my childhood. It was the memory which had just come to the surface in my counseling, the “Milk Drop Coronet” photograph by Harold Edgerton, framed and lighted, and on display in the Metropolitan Museum of Art. I couldn’t believe my eyes, it was the same photograph I had only seen once before, and yet I had drawn a sketch of it in my journal just a month before this.

My Lord and Savior Jesus Christ is with me, He is intimately involved in the tiniest details of my past, my present, and my future. Trusting God means looking beyond what we can see to what God sees. A wider view, a broader perspective, a new day, a new way of looking at things, of allowing all the feelings to surface.

Because of Christ, I am not alone, He is with me, invisible to the human eye, yet “quicker than a wink,” in the blink of an eye, what was unseen is seen, in that other realm, that other dimension, just beyond the veil, visible in the heavenlies.

He sees me, He knows me, He knew me, before He knit me together in my birthmother’s womb, I was planned, I am eternally significant. He knew that before I saw the photograph of the "Milk Drop Coronet" for the first time in 1962 that it would come to the surface with feeling in my journal entries in November 2007, and I would turn aside to take a closer look in the Metropolitan Museum of Art in December 2007…I am known, I was planned, I am significant, I have hope for the future.

Now, this word study of the word “crowned” with the added meaning, “to surround, encircle, enwrap” reminds me that He “crowns” me with His glory and honor everywhere I go, surrounds me, encircles me, like a hoop skirt of light, visible in the heavenlies.

One of the greatest compliments I’ve ever received, included in the newspaper article about me in The Ledger in 1993 was, “She was like a shining light coming through the door.” Then recently, another friend described me the same way. I know that “light” is Jesus shining through me, surrounding me, encircling me.

A pastor’s wife once told this true story of a time she was walking down a path in a park, when suddenly, she could see a man running toward her with an evil intent and expression on his face. She cried out, “Jesus, help me!” and instantly she said she actually saw a “hoop skirt of light” shining down around her, and the evil man just kept running past her, as though he had not seen her, and she was safe.

Let your light shine before others, that they may see your good deeds and glorify your Father in heaven. Matthew 5:16

Just to know that I know that I know that because I have placed my trust in the finished work of Jesus Christ, I am redeemed by His precious blood, He has crowned me, surrounded me, encircled me with His glory and honor…I am a greatly blessed, highly favored, and deeply loved child of God.

Heavenly Father, thank you, that in Christ, You have crowned me with Your glory and honor. I am a greatly blessed, highly favored, and deeply loved child of God. Thank you for how Your favor is operating and functioning in my life. It surrounds me and encircles me like a shield. Your favor goes before me and prepares my way. Your favor opens doors of blessing and opportunity in my life. Wherever I go and whatever I do, Your favor is with me, surrounding me, encircling me. Your favor fills my life with overflowing blessing, peace, joy, fulfillment, and abundance. In Jesus’ precious name I pray, amen.

Look Up—meditate on Matthew 5:16 … pray to see what it reveals about the character of God.

Look Out—as you meditate on Matthew 5:16 … pray to see how you might apply it to your relationships with others. Let the nature of God impact on every relationship, for your good, and for His glory.