Your love is extravagant... 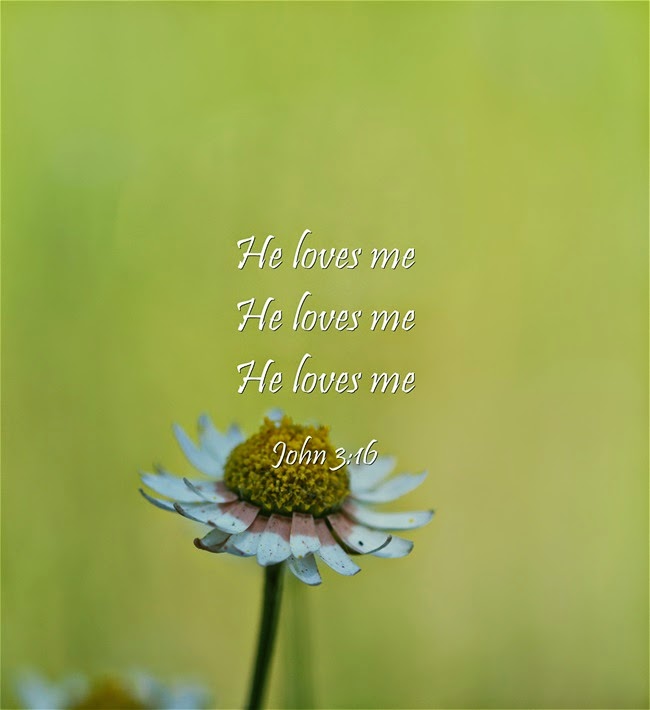 The praise and worship time in the evening service was coming to an end. I had my eyes closed, lost in the music, feeling the presence of my Lord and Savior Jesus Christ, so real, as if His arms were wrapped around me. I opened my eyes and looked down at the Bible book cover on the seat in front of me. It was as if my Savior was speaking to me through the words I was reading on the cover. There was an embroidered daisy with three small petals gently drifting down, and beside each petal were the words...
“He loves me”
”He loves me”
”He loves me”
...usually a girl playing the daisy game alternately speaks the phrases, "He loves me," and "He loves me not," while picking one petal off a daisy for each phrase. The phrase she speaks when picking off the last petal supposedly represents the truth about the object of her affection loving her or not.

In his book, The Ultimate Conversation: Talking with God Through Prayer, Dr. Charles Stanley writes, “Your intimacy with God–His first priority in your life–determines the impact of your life.” Stanley goes on to say there was a time in his life when he wrestled with knowing God more deeply. He couldn’t identify what the encumbrance was, no matter how much he sought the Lord and prayed. Then, he called his four closest friends, who were all godly men, and said, “God is trying to teach me something, but I don’t know what it is and I need your help to figure it out.”  He says they conversed for several hours.

Finally, he writes that one of the men said, “Charles, put your head on the table and close your eyes.” Stanley says he did this and quietly the man asked him, “Imagine your father just picked you up in his arms and held you. What do you feel?” The friend knew Dr. Stanley’s father had died when he was nine months old and that his loss had had a tremendous impact on Stanley’s life.

Dr. Stanley says he immediately began crying, and he continued weeping for a long time. Still, Stanley says, he did not understand what was causing so much emotion. The friend again asked, “What do you feel Charles?” Stanley writes, “The feelings were so overpowering, it was a long time before I could answer him. At last I replied, “I felt hugged, like I was warm and secure. I felt…loved.”

He realized that until that day, he had never really experienced God’s love. He said he told others about God’s love, but had never truly sensed it for himself. Stanley says, “That day changed my life. The time with four of my friends transformed my ministry and everything I felt about the Christian life; the Father’s love had become real to me and extremely powerful.”

Dr. Stanley invites us to do the same, writing: “I challenge you to do the same. Put your head down and imagine the Father holding you. You may be surprised by the emotions you feel. You may, as I did, realize His overwhelming love for you. You may realize that you’ve been running away from Him all of your life when all you’ve wanted to do is feel safe in your heavenly Father’s arms. Be still and allow God to deal with whatever emotions and issues arise. He will draw you into a deeper, more intimate relationship than you have ever known. Trust Him.”

Are you tired? Worn out? Burned out on religion? Come to me. Get away with me and you’ll recover your life. I’ll show you how to take a real rest. Walk with me and work with me—watch how I do it. Learn the unforced rhythms of grace. I won’t lay anything heavy or ill-fitting on you. Keep company with me and you’ll learn to live freely and lightly. —Matthew 11:28-30 The Message

Take a few minutes to be encouraged by Darrell Evans’ song, Your Love Is Extravagant...

Your love is extravagant...Your friendship intimate...I find I'm moving to the rhythms of Your grace...Your fragrance is intoxicating in our secret place...

Was this encouraging to you? Please feel free to leave a comment in the box below, I'd love to hear from you!