You're Going to Be Okay because... 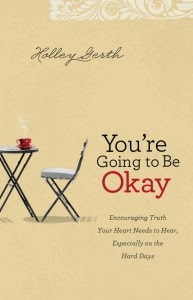 In celebration of You’re Going to Be Okay, Holley Gerth’s wonderful new book, her Coffee For Your Heart writing prompt this week is: “No matter what happens, you’re going to be okay because…”

My response to this prompt came after I watched the C-SPAN video of the National Prayer Breakfast in Washington, DC, on February 6, 2014. I was so encouraged to hear our national leaders praising the name of our Lord and Savior Jesus Christ, and sharing their testimonies about the power of prayer in their lives. There were two powerful musical performances, the opening song by Steve Green, “He Holds The Keys,” and the closing song by Yolanda Adams, “This Too Shall Pass.”

One of the many testimonies and powerful prayers included professional surfer Bethany Hamilton, known as the "Soul Surfer," who spoke about her recovery after she lost her arm in a shark attack and how her physical setback allowed her to realize her true purpose outside of surfing. "I felt as though I had lost more than just my arm," she said. "I thought that my hopes and dreams to become a pro-surfer and adventure the world were stripped away, but the faith I had in Jesus Christ gave me the strength to comprehend and lean on Him for understanding, even as a young girl"

During her speech, Bethany read her favorite Scripture:

“For this reason I kneel before the Father, from whom every family in heaven and on earth derives its name. I pray that out of his glorious riches he may strengthen you with power through his Spirit in your inner being, so that Christ may dwell in your hearts through faith. And I pray that you, being rooted and established in love, may have power, together with all the Lord’s holy people, to grasp how wide and long and high and deep is the love of Christ, and to know this love that surpasses knowledge—that you may be filled to the measure of all the fullness of God. Now to him who is able to do immeasurably more than all we ask or imagine, according to his power that is at work within us, to him be glory in the church and in Christ Jesus throughout all generations, for ever and ever! Amen.”--Ephesians 3:14-21

Following her accident, she recounted that God was calling her to something greater than the dreams she had for herself. Now, she serves as a role model and inspiration to young women around the world through motivational speaking engagements. She closed her testimony saying, "Because of where Jesus brought me, I have no regrets of the adversities God has allowed me to go through. As you look at me, you could think, 'Wow, have pity on her, she lost her arm to a shark.' But I look it as something beautiful. God has taken something awful and turned it into something incredibly amazing.”

After watching the entire broadcast, my response to the Coffee For Your Heart prompt is summarized by the opening and closing songs at the National Prayer Breakfast,

“No matter what happens, you’re going to be okay because…Jesus Holds the Keys and This Too Shall Pass.”

The opening song speaks about God’s Sovereignty, proclaiming that nothing comes into our lives that is not filtered through God’s Hands of love, and the closing song reassures us that in our times of trials, God’s grace is sufficient, and He will never leave us or forsake us.

Please feel free to share your comments in the box below after watching the National Prayer Breakfast video and listening to the opening and closing songs. I pray it is as much of a blessing for you as it was for me.

Email ThisBlogThis!Share to TwitterShare to FacebookShare to Pinterest
Labels: Bethany Hamilton, coffee for your heart, God's sovereignty, grace, National Prayer Breakfast, You're Going To Be Okay