servant leadership--do the next thing 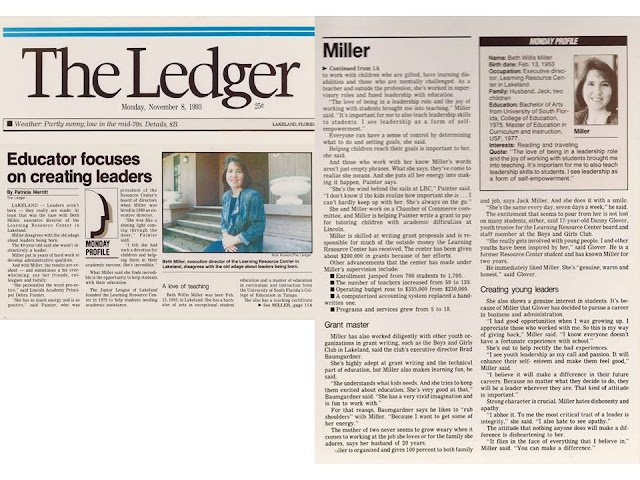 Leadership became a passion for me early in my life...

No matter what the task, I have found the maxim, 'Do the next thing' has helped me look beyond what appear to be overwhelming obstacles to get the job done...

When this Monday Profile (above) was published on the front page of The Ledger, I heard an interview on Moody radio with Elisabeth Elliot, who was talking about her life in Ecuador following the murder of her husband while they were missionaries. As a widow with a young infant, living in the jungles of a foreign land, Elliot’s world must have felt as though it had been turned upside down. But instead of throwing up her hands and saying, "What’s next?" she asked, "What’s the next thing?"

Elliot said in the interview, "You can imagine how tempted I was to just plunk myself down and say, 'There is no way I can do this.' I wanted to sink into despair and helplessness, then I remembered this old Saxon legend, 'Do the next thing.'"

Instead of allowing the burdens to stack until they completely blocked out the sun, Elliot dealt with them one at a time. She said you should not sit down and think of all the things you have to do because it can be overwhelming. Instead, just pick the next thing and do it, then move on to the one after that. She said while pushing through them, you’re likely to find that many of the problems will work themselves out.

The essence of servant leadership is found in the following poem from which that maxim comes:

Do The Next Thing

From an old English parsonage, down by the sea


There came in the twilight a message to me;


Hath, as it seems to me, teaching from Heaven.


And on through the hours the quiet words ring


Many a question, many of fear,


Many a doubt, hath its quieting here.


Moment by moment, let down from Heaven,


Time, opportunity, guidance, are given.


Fear not tomorrows, Child of the King,


Trust them with Jesus, "DO THE NEXT THING."


Do it immediately; do it with prayer;


Do it reliantly, casting all care;


Do it with reverence, tracing His Hand,


Who placed it before thee with earnest command.


Leave all resultings, "DO THE NEXT THING."


Looking to Jesus, ever serener,


(Working or suffering) be thy demeanor,


In His dear presence, the rest of His calm,


The light of His countenance be thy psalm,


Strong in His faithfulness, praise and sing,


Then, as He beckons thee, "DO THE NEXT THING."

How about you? In what ways do you serve as a servant leader?


How does the maxim, 'Do The Next Thing' help you approach the tasks you have before you?

Email ThisBlogThis!Share to TwitterShare to FacebookShare to Pinterest
Labels: do the next thing, overwhelming obstacles, servant leadership